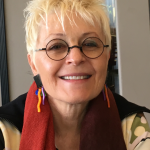 My journey as an artist began in my childhood.I grew up in the Mojave Desert in a small town called Hesperia. I went to kindergarten in a one room school house from the 1800s and fell in love with the Arts there. My high school teachers were painters and crafts people. I learned to draw and paint, work with leather, enamels and clay. At the end of my senior year I left for California State University Long Beach to major in Art. It was there I met some influential teachers like Alvin Pine and was drawn to the Jewelry/Metals department. 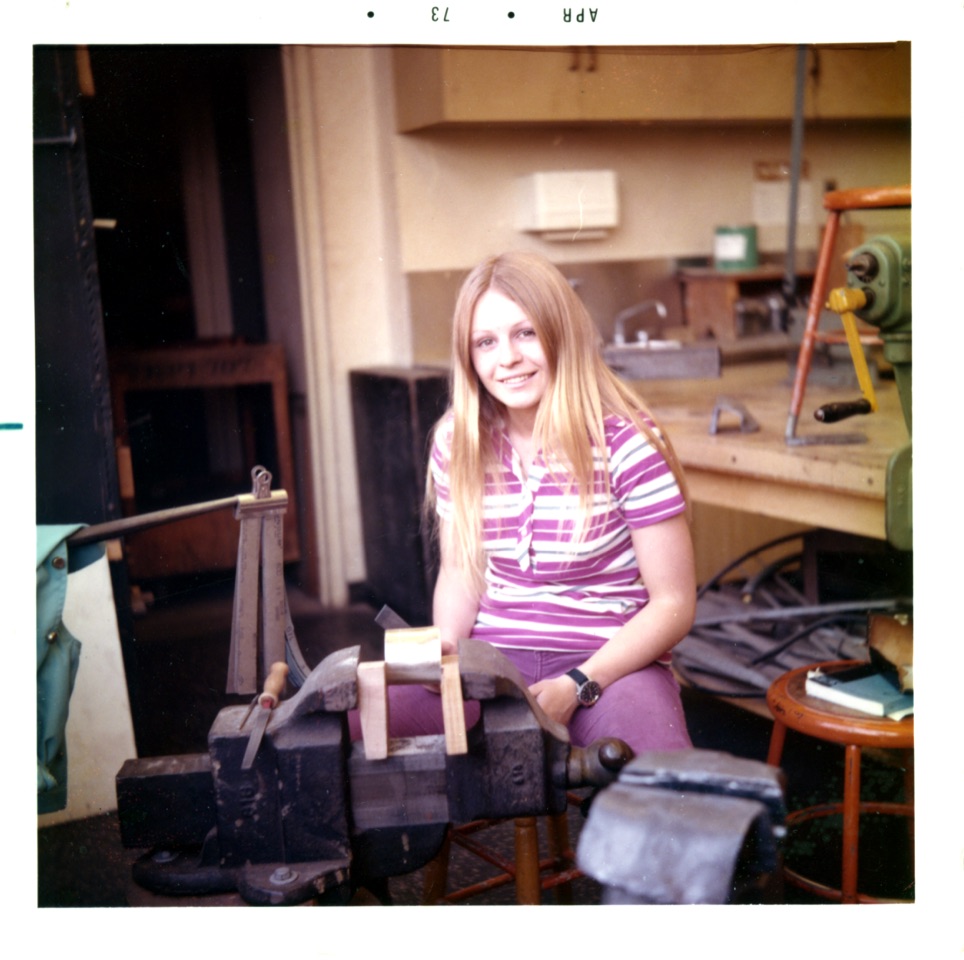 In the Jewelry Studio at CSULB, we worked until the early hours of the morning listening to electronic music from an FM station in LA and creating edgy fabrications in metal.
The training was solid in traditional skills but allowed us a lot of creative freedom.
I went on to do my MFA there even though I was encouraged to go to a different program for a new experience. Instead I began taking classes and workshops in science and technology. I did a series of classes through UCLA Extension in holography, took a class in scientific glassblowing, a gem faceting class and began work on a project using liquid crystals for image creation. In 1980, my MFA show incorporated large aluminum panels that were carved and painted and overlaid with holograms. 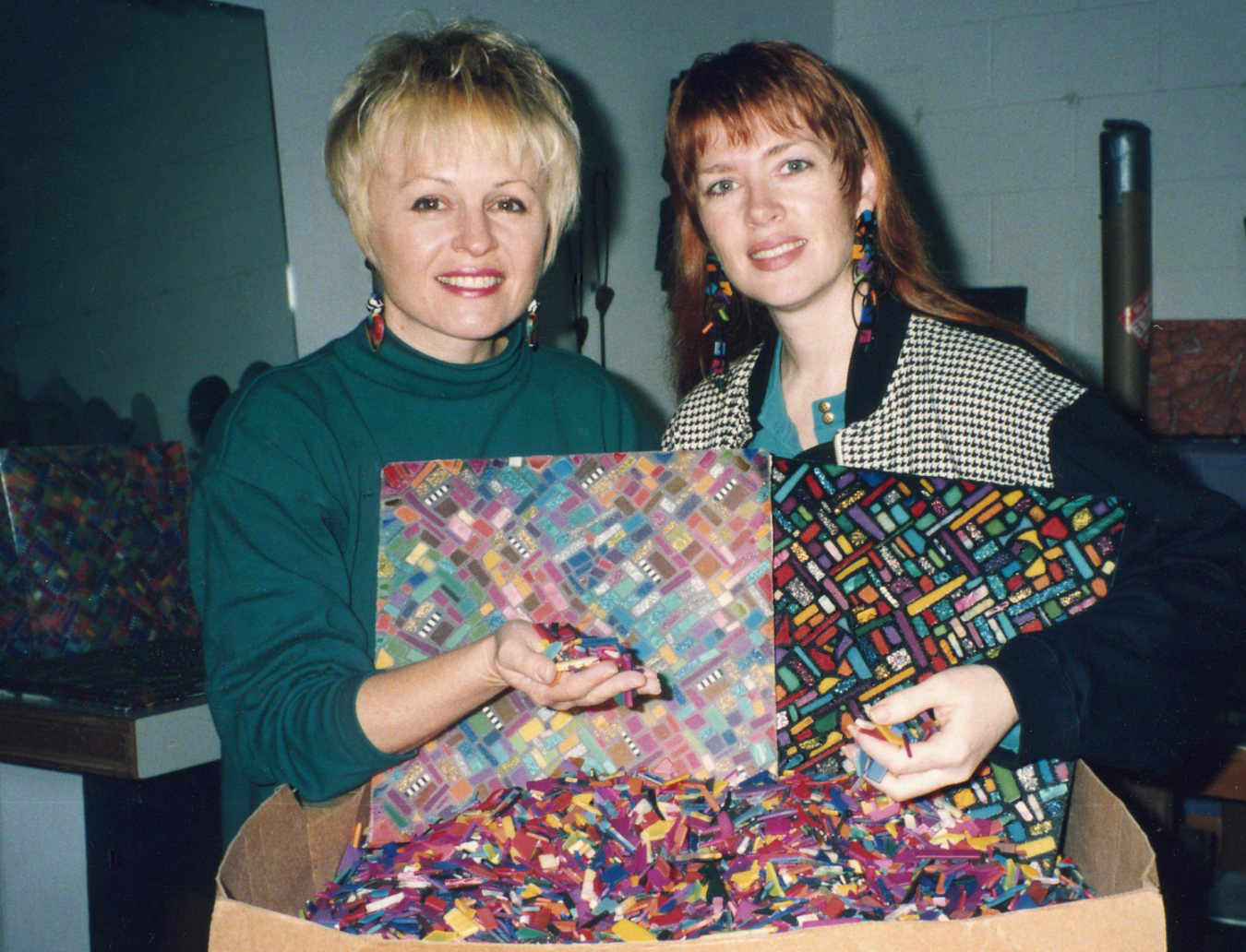 I was also teaching at this time at Cypress College and East LA College. I taught Beginning Jewelry and 3D Design at CSULB for Al when he took his sabbatical. But finding work teaching was tough with state budget cuts. In time, I began to see business as a possible alternative. One of my friends and fellow metals student, Karen McCreary, suggested we do a jewelry line. We applied and were accepted to ACC show in San Francisco. The line was made from patterned and painted acrylic. It was bold and modern. And we had a lot to learn about production, marketing and pricing our work. 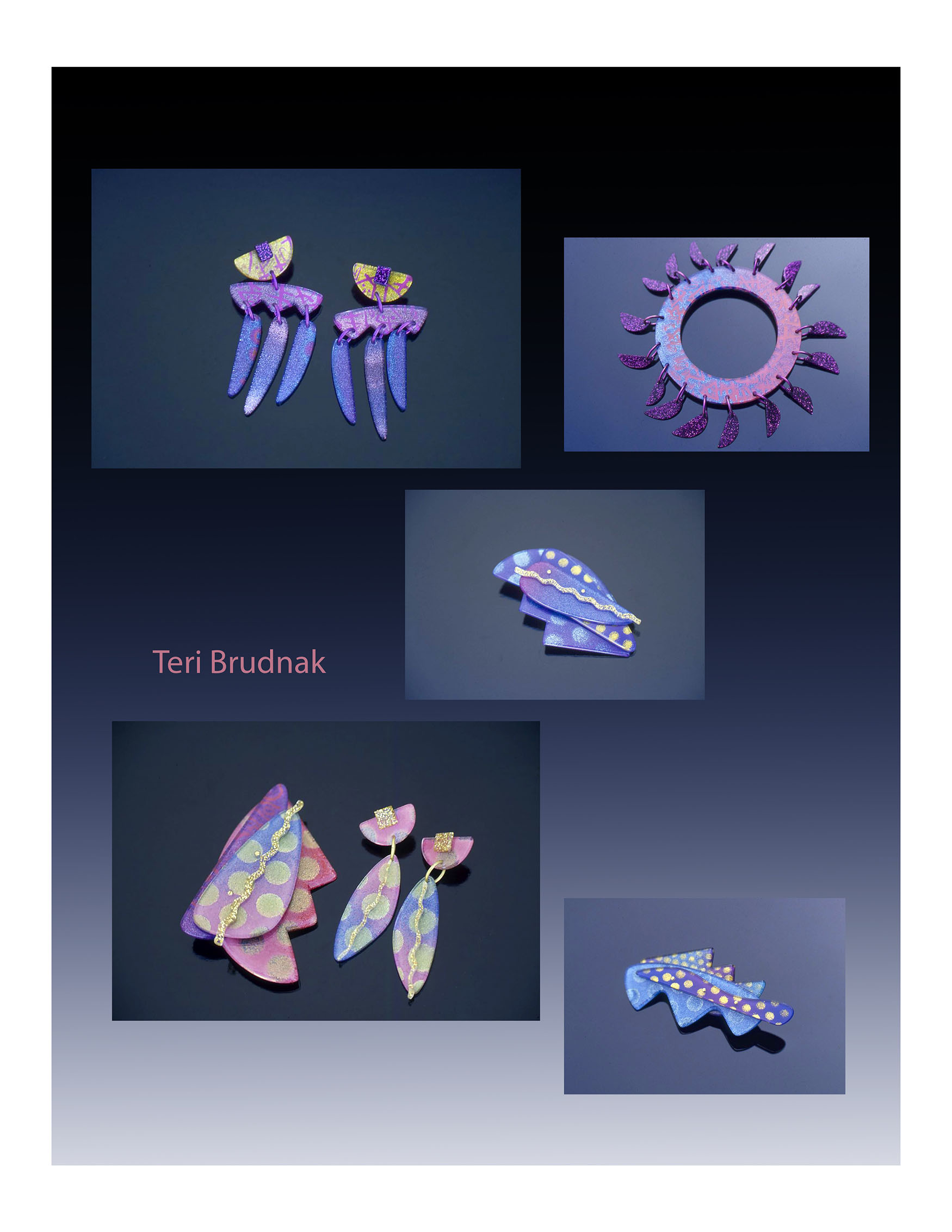 At first, we made everything by hand. Cutting, finishing and polishing were tedious. Once again, technology came into play. We found a sign company and had them laser cut our parts. We also found a materials finishing company and worked with them to tumble polish our parts. When we began to use more metals, there was an anodizing company for our aluminum. While doing a show in Santa Monica, we met the costume designer for Star Trek-The Next Generation and began a long run of making accessories for the show. It was exciting to visit the studio and see our work on the screen!

In 1992, there was an economic downturn. I thought about returning to teaching. My husband was teaching at a high school in Orange County and told me about jobs opening up for art teachers. But I needed a secondary credential. I went back to CSULB and this time I was ready to fully engage with art and technology. I began to learn Photoshop and work with an early 3D program. I would go on to establish a Digital Media program at a school in Orange County in 1999. The program I established taught Film, Graphic Design, Photography and Animation classes. Many of my students went on to promising careers in these fields.

Along the way, I took advantage of summer vacations to take life drawing and painting classes at Laguna College of Art and Design. We built a studio in the house we moved to in Dana Point.

In 2015, I found some surreal images online. Tracking them down, they turned out to be 3D 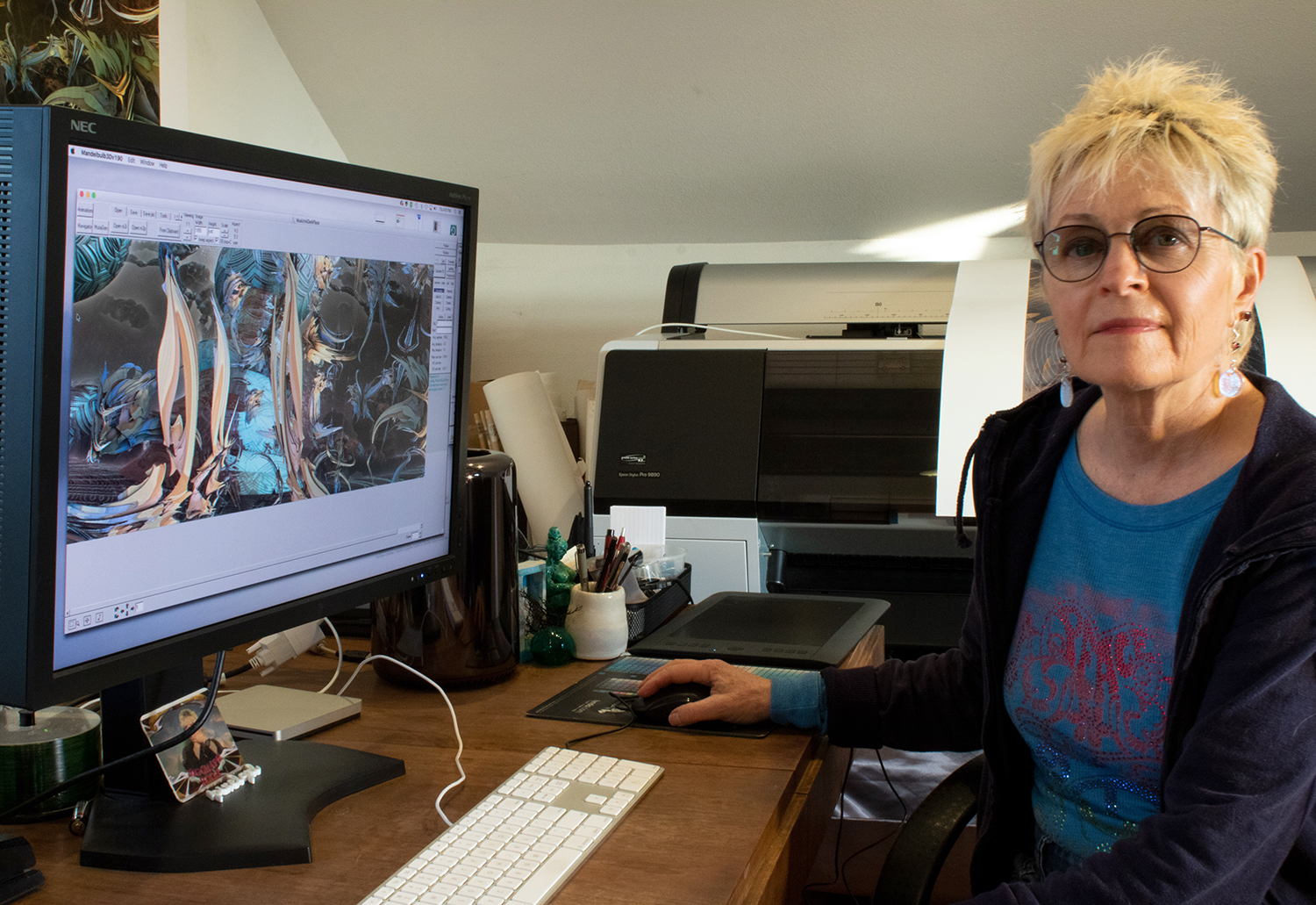 Fractals. How could I get involved in making these incredibly fantastic worlds? There was a group online involved with 3D Fractals and I began to learn. Because of my background in 3D Animation, I was able to progress quickly with the media.

After I retired from teaching in 2016, it took me about three years to settle into a rhythm of working in my studio. I was able to take workshops and be a student again. In the past few years I’ve taken jewelry and enameling workshops, learned to work with gold fused to steel, taken Lapidary classes and set up electro forming and electro etching areas in the studio.

In September 2020 my dear friend and former partner Karen passed away. It was a heavy loss. I helped her brother with the contents of her studio and came home with many jewelry parts we had made together. I plan to made a new line from some of these combined with more contemporary pieces. There is so much there to work from. 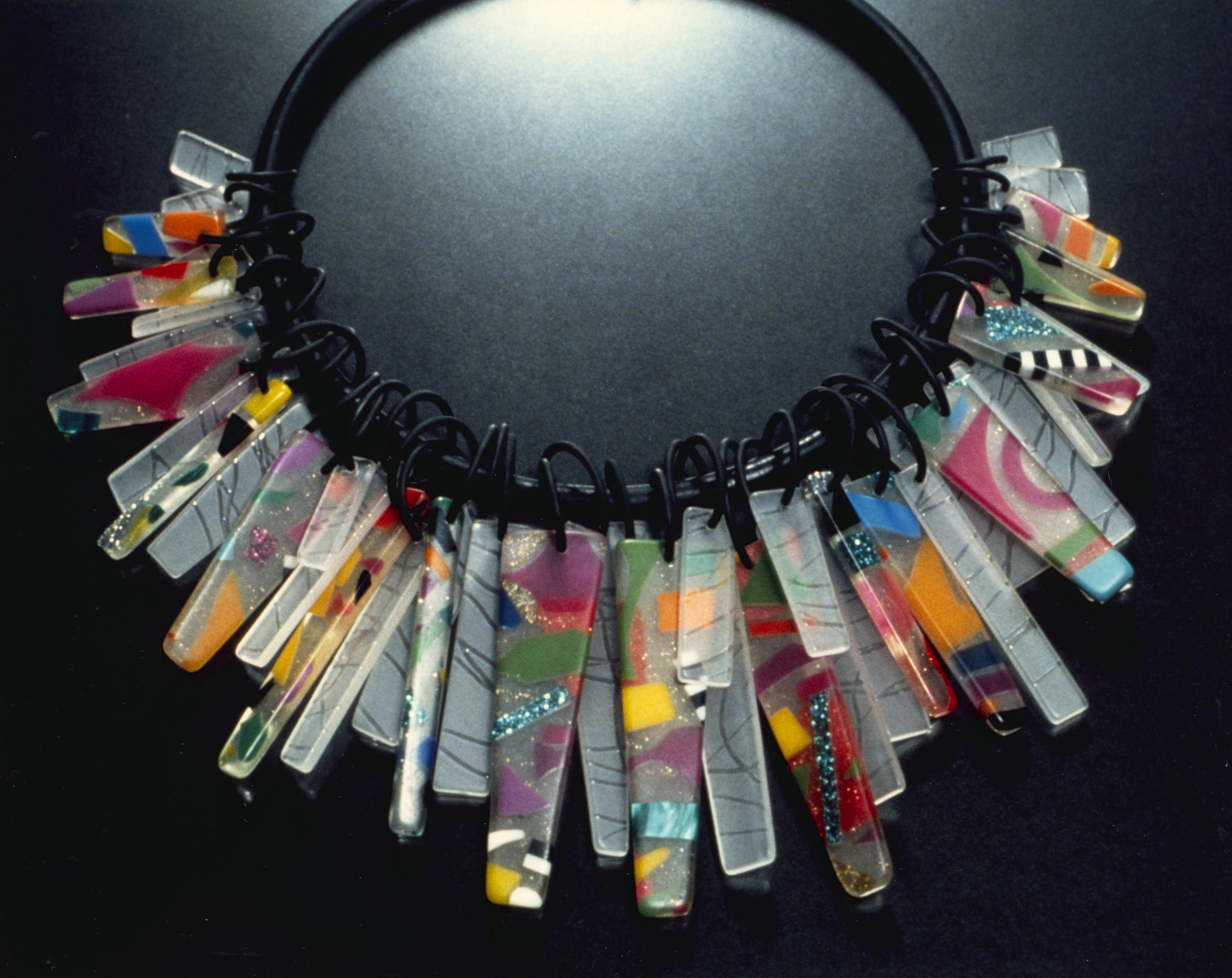 My current projects are building several lines of jewelry I can market, cutting my own stones, continuing to draw from life models and using my unique digital images to create animations. It’s enough to keep me busy for another lifetime. But it is exciting to wake up each day to a new creative challenge.